Archive for the tag “old magazines”

The US voters look disappointed as they judge the candidates for president Taft, Roosevelt and Wilson as if they were agricultural exhibits at a county fair. 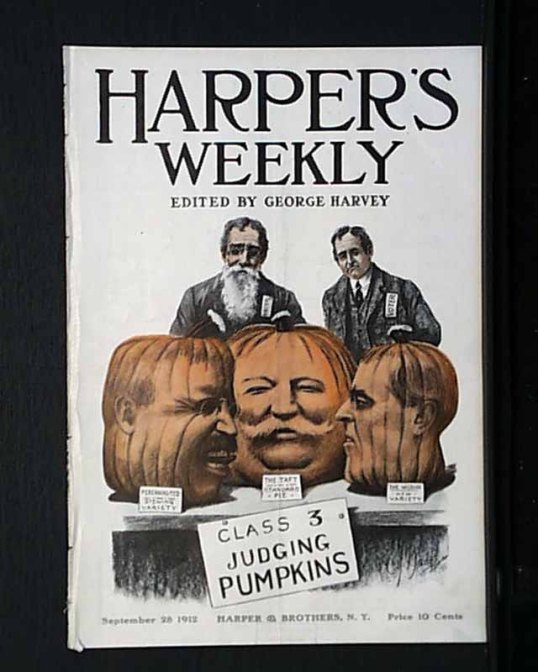 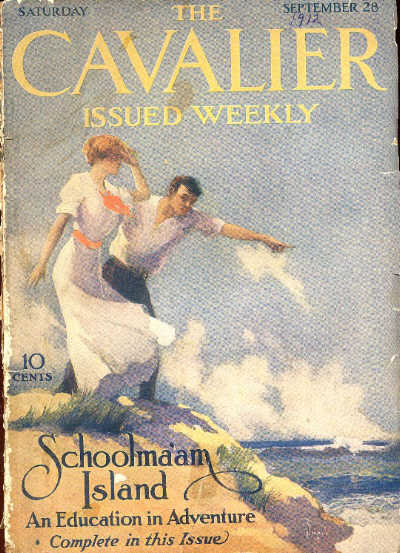 THE CAVALIER
September 28, 1912
“Schoolma’am Island – An Education In Adventure”

Besson’s Nephometer – a new instrument for measuring the cloudiness of the sky, the Comb Nephoscope by which a scientist can measure the altitude, direction, and velocity of clouds by staring intently into a mirrored ball reflecting the clouds.

Louis Fancher was born in Minneapolis, Minnesota in 1884. He studied with various artists and is an illustrator in San Francisco as well as in New York.

Louis Fancher was born in Minneapolis, Minnesota in 1884. He studied with various artists and is an illustrator in San Francisco as well as in New York.

In its continued attacks on Theodore Roosevelt’s third party campaign for president, HARPER’S WEEKLY show Roosevelt (as “The Great Bull”) and his supporters as mushrooms growing on the forest floor strewn with the planks of the Progressive Party. A “bull-moose” toad is nearby. The party planks read : Woman Suffrage – Demands by Col. Roosevelt – Federal Control of Big Business – Initiative Referendum and Recall.

Edward Penfield was born in June 1866 in Brooklyn, New York. He studied at New York’s “Art Student’s League”and first worked for Harper’s Weekly then later became Harper’s art director. He developed his own unique style of simplified figures with bold outlines in settings free of extraneous detail. This dramatic style lent itself to posters and Penfield popularized the medium much like Mucha and Latrec have done in Europe. He wrote and published a book titled Holland Sketches which was published by Scribner’s in 1907. 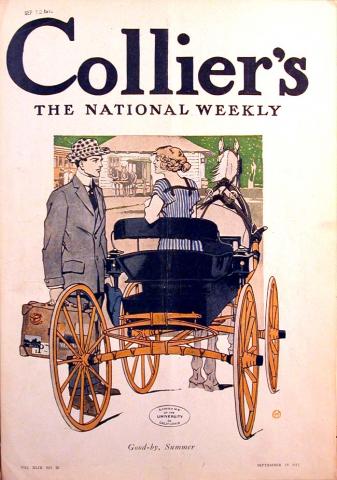 Following in its continuing criticism of Theodore Roosevelt’s third party campaign for president, HARPER’S show TR as a hot air balloon which rises the more his supporters throw money and bonds at the campaign. 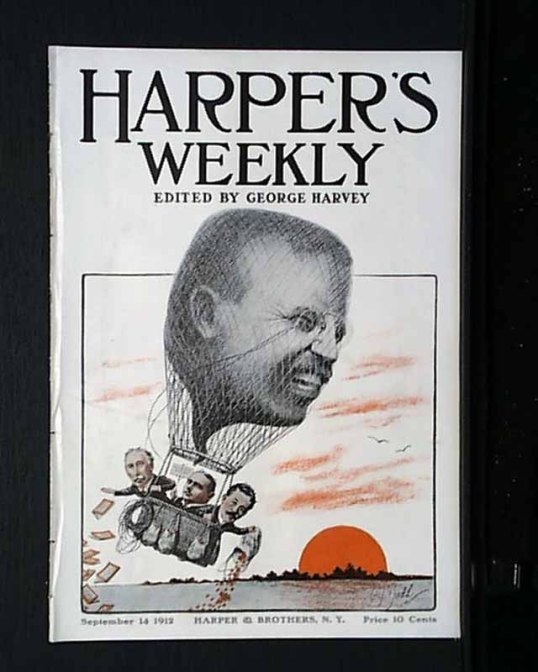 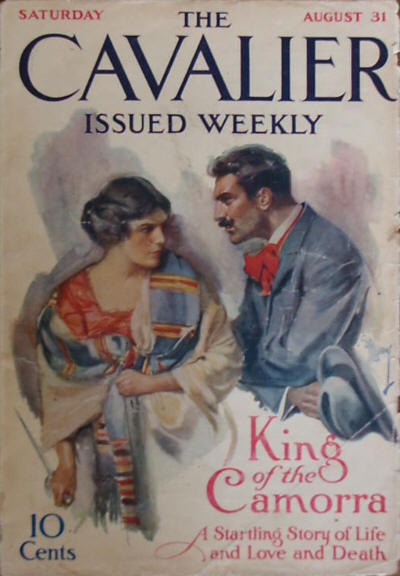 “Come one, come all!!! This rock shall fly
From it’s firm base as sound as I.”

With upcoming presidential elections in November, Uncle Sam checks out the candidates.

John Tinney McCutcheon was born near South Raub, Indiana in May 1870. He graduated Purdue University in 1889 where he worked on the student newspaper and yearbook with a Bachelor of Science degree. He moved to Chicago, Illinois, where he worked at the Chicago Morning News in 1903.

Whereas HARPER’s is anti-Roosevelt, COLLIER’s is pro-Roosevelt. Portrayed is McCutcheon’s cartoon of Roosevelt’s Bull Moose fighting off the wolves of Bosses and Special Privilege. 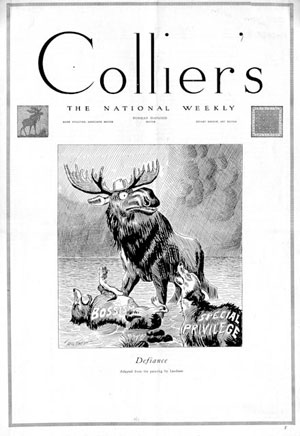 After weeks of anti-Roosevelt covers, HARPER’S WEEKLY finally gives it a rest with their Theatrical Number – Season 1912-1913. 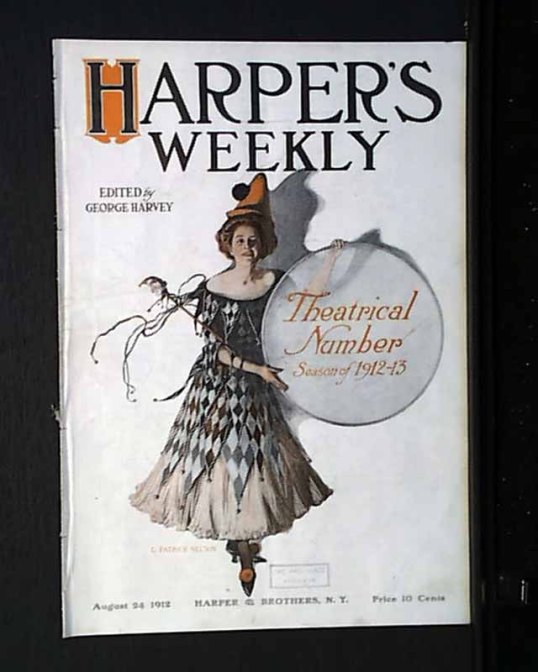 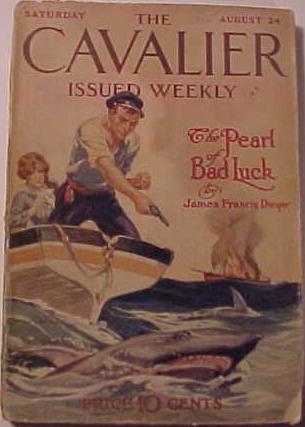 Clarence F Underwood was born in Jamestown, New York in 1871. He studied at the Art Students League and the Academy of Julian in Paris in 1896. Underwood was a member of the Society of Illustrators in New York City in 1910 and was on staff of the New York Press. He currently illustrates for SATURDAY EVENING POST, LADIES’ WORLD and other magazines as well as many literary works. 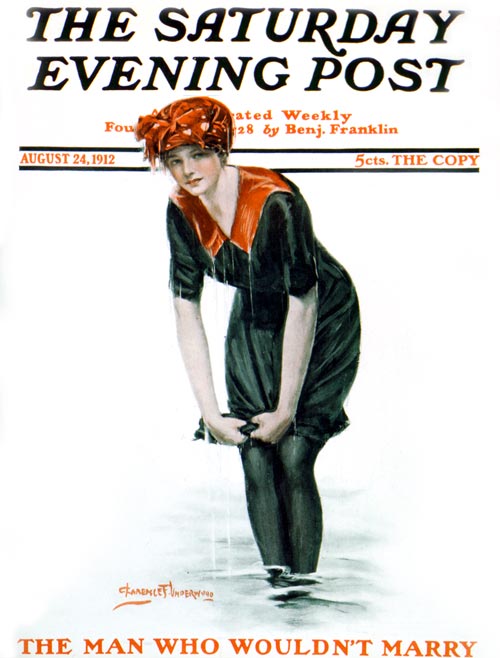 There used to be a time where taking off you clothes and swimming naked was the norm for kids. What you had to watch out for was someone taking your clothes and tying them into difficult knots.

Theodore Roosevelt is making a Third Party run for President under the Progressive Party which is the only party that endorses Woman Suffrage. In its continued criticism of the ex-president’s campaign which they consider a “guerilla party”, HARPER’S portrays him as a vaudeville act. 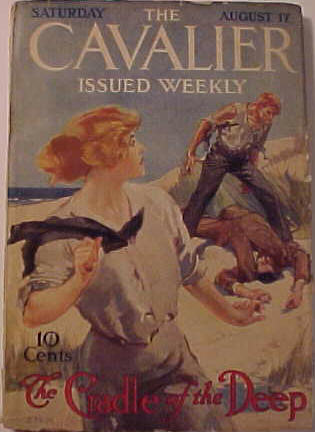 THE CAVALIER Issued Weekly
“The Cradle of the Deep”
August 17, 1912

Posted in Uncategorized and tagged old magazines | Leave a comment

Continuing its criticism of Theodore Roosevelt’s Third Party campaign as president, HARPER’S WEEKLY portrays TR as a Mammoth Chameleon in the Progressive Park Zoo. “Has the habit of changing color at the slightest provocation.”

A cartoon from HARPER’S WEEKLY show all three presidential candidates teeing off at golf, taking aim at the White House.
“Mr Taft takes the first drive.”

Adolph Treidler was born in Westcliff, Colorado, studied at the California School of Design in San Francisco and with Robert Henri in New York. He first illustrated for McClure’s magazine in 1908, then made pictures or cover designs for Harper’s, Century, Scribner’s, Collier’s The Saturday Evening Post, Woman’s Home Companion and many national advertisers.

“Off The Dock” by Adolph Treidler
COLLIER’S The National Weekly
August 10, 1912